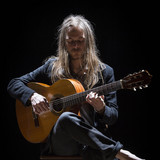 lunngfern.bandcamp.com Find my Improvisations here: All the Raw Melodies   Dear Lover of Sound,   When I was a young boy I had the luck of beeing the pupil of a blind guitar teacher for about three years. And I like to believe that his dim eyelight had a positive effect on my approach to music and how I see the world. After those three years of guitar lessons I quit and only touched the guitar from time to time. After school the thought to travel the world awoke in me and I picked up my guitar again and practiced like a madman.   In the first year of practicing I was mostly sitting at home playing the guitar all day. By the end of the year my first album was recorded at an cosy attic of a friend of mine. This was the first step on my journey which has led me to almost every country in Europe so far. I’ve climbed the mountains of Norway, seen the sea of France, walked crowded street’s in Granada and sat at the old stairs in Prague playing music. I learned simplicity while sitting next to Olmo at the marketplace in Granada and feeling his deep calm towards existence – even though he had not sold a single item from his store that day. I am thankfull for this journey with all its places and characters.   With warm regards, Lunng Fern