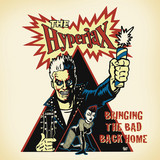 From the hidden depths of the north west of England The Hyperjax have blazed the trials of the live circuit wordwide since 1996. They are a band made up of Rockabilly, Punk Rock and Psychobilly influences among other genres while maintaining that they are just a Rock n Roll band. After making an impact on the UK Psychobilly scene at the end of the 90s they put out their self released EP 'Happy Pillz' in 2000 this gained them critical acclaim landing them a slot at the New York Rumble festival that Oct which fueled their impact over Europe the following year landing them similar festivals in Holland and The Satanic Stomp in Germany. Releasing their debut album 'Generation X-Rated' in 2002, their popularity increased and were constantly touring up and down the everywhere they could and managed to land a slot at the more commercial orientated festival 'Carling Reading Festival' in 2003. The following year they toured up and down Calfornia USA to masses of crowds who had anisipated their arrive having bought their album . Over the next decade they released 'The Bottom Line (2007) The Wildest Card (2008) and 'March to your own beat' (2015) The Hyperjax are a band who master the power of the song. Thundering drums and bass, lightening guitar hooks and singalong choruses straight from the heart and go straight for yours. What more could you ask for? Now on Wolverine Records in 2019 The Hyperjax put out the goods with their 5th studio 'Bringing the bad back home'