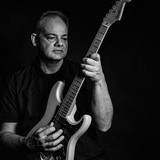 Aamer Khan is a songwriting vocalist and guitarplayer from Copenhagen, Denmark. Having played bass and guitar in local bands since 1986 "Play" released in early 2017 was his first album release. The follow-up album, Rounded, was released in late 2018 and continues the aim of serving melodic rock songs with a twist. In March 2020 Aamer and his trio went into the studio to record an EP set for release in August 2020. The first single is titled "Someone Watching Over Me" and will be released on all major streaming platforms on July 3rd, 2020. Tourdates are currently being scheduled. More to come later. The band