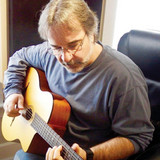 US composer Michael Nickolas works full time in music creation and has been featured on NBC, ABC and CBS television, including shows like “The Late Show with Stephen Colbert", “Shameless” and “The Voice." He is a “Boston Music Award” winner and a recipient of the ASCAP "Award for Writer Members." He is a Berklee College of Music Graduate, a former employee of Cakewalk Music Software and a contributing author to “Recording Magazine." Thanks for listening! www.studionineproductions.com