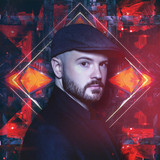 Hard Dance DJ | Producer info@mackswolf.com First discovering Happy Hardcore in 1998 with the ‘Bonkers’ album series, Macks grew an obsession with the fast-paced, energetic sound. He was immediately drawn to music production and spent subsequent years developing and honing his craft. Bursting onto the scene with his debut track “Dark Sky” in 2015, Macks Wolf wasted no time in securing his place as one of the leading new artists in UK Hard Dance. Catching the attention of Happy Hardcore veteran Mark Breeze, Dark Sky was immediately signed for release on Futureworld Records alongside some of the biggest names in the genre. From this point, he has consistently released quality music, frequently hitting the Beatport Hard Dance Top 10 and reaching the number 1 spot several times with track's like ‘Galleon’ and more recently 'Hit 'Em Like This'. You’re guaranteed to hear plenty of Macks Wolf tracks in Happy Hardcore sets all around the world with support from major artists such as Darren Styles, Mark Breeze, Hixxy, Joey Riot, Kutski and even Grammy nominated cult record producer and DJ, Hudson Mohawke. This artist is certainly making waves around the world of hard dance and has proven to be a promoter and raver favourite, loved by many for not only his music but his unique style and personality. Be sure to keep an eye out for Macks Wolf as he continues to cement his place strongly within in the industry.