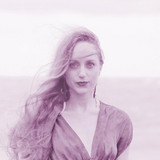 American singer-songwriter, Amanda Rogers, hails from Upstate NY where the rustbelt of industry-past meets idyllic landscapes. The collision between these two worlds, one of metal and concrete and the other of mud and verdure, was the precise place her sound was forged. A pragmatic daydreaming teenager in the late-nineties, her earliest recordings illustrate this contradiction perfectly as she musically and aesthetically merged classical and punk. Those early albums, released through Brooklyn-based punk/hardcore label Immigrant Sun Records, were often labeled as "lo-fi bedroom ambience" and "chamber pop.” Her music evolved as she expanded on her musical experiences while touring with indie-rock and hardcore bands, joining a pop-rock outfit, and later touring as part of a grunge-folk-pop duo.

Now with 11 solo albums, her sound vacillates between "gritty blues and folk-pop", and is described as being "intimate, intense, and expressive." Her live performances are "raw and emotional", "haunting", "quirky and delicate as well as powerfully moving."