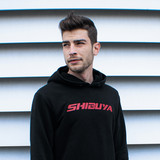 Francesco Bisanti, aka Seaquake, was born in Lecce in 1997 where he began to cultivate a passion for music since he was 12 years old. After studying piano he met electronic music through a dj family friend. Over the years he has established himself in his area thanks to his strong and various DJ sets, always managing to range between many musical genres. At the age of 14 he released his first unpublished self-production on a very small Italian label and over the years, inspired by great producers like Hardwell and Dj Snake he found his sonorities. Seaquake in its productions is characterized by the use of very special melodies that adapt to both radio listening and festival dancing by mixing Electro House, Bass House and Tech House for a unique sound.In 2016 he launched his official podcast on itunes climbing the Italian charts and reaching the top position for over 2 weeks. In 2017 he founded the group 'The Way Out' obtaining in the first season the residence in the biggest Italian events park 'PostePay Parco Gondar' and opening the concerts of big artists like Hardwell, Major Lazer, Rehab, David Guetta and debuting with the single “Fopa Fache”. Over the years Seaquake has worked constantly in Italy and between 2018 and 2019 has released a series of singles that have met with great success, including “Work” in collaboration with "Curly Brothers" and which sees Pop, Tech House and Dance join together !