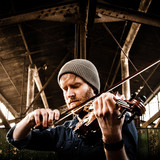 Jeremy Kittel is an American violinist, fiddler, and composer. He received a Grammy nomination for "Best Instrumental Composition” in 2019 alongside prevalent composers such as John Williams and Terence Blanchard. Fluent in multiple musical genres, he composes original music that draws from a wide variety of influences including folk, jazz, Celtic, Classical, electronic, and more.   Kittel performs with his group Kittel & Co., as a soloist with orchestras, and in collaborative and supporting roles with many of today’s leading artists. In demand as a composer and arranger, he has worked with Abigail Washburn and Bela Fleck, My Morning Jacket, Aoife O’Donovan, Theo Katzman, Jars of Clay, Yo-Yo Ma and the Silk Road Ensemble, Laura Veirs, Sara Watkins, and the Grammy-winning Turtle Island Quartet (of which he was a member for five years). He has also recorded with artists such as Edgar Meyer, Chris Thile, Fleet Foxes, and Esperanza Spalding.