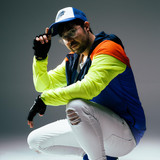 Marsal Ventura is a well known dj and producer from Barcelona. His fame raised when he became an important radio deejay in several radio station in Spain, Maxima fm & Flaix FM. As a Dj he has already performed in more than 500 clubs during his career. Some of them are in Privilege Ibiza, Pacha Barcelona, Pacha la Pineda, Pacha Sitges, Space and Titos Mallorca. Also at the biggest european festivals as Electrobeach Festival ( Best Festival in France , Medussa Beach Festival ( Spain & Mexico ), Barcelona beach Festival ( Best Festival in Spain ) and Daydream Festival ( México ) among others. He has shared stage with artist like David Guetta, Martin Garrix, Steve Aoki, Dimitri Vegas & Like Mike, Armin van Buuren , Calvin Harris, Avicii, Axwell /\ Ingrosso, Hardwell, Deorro, Kygo, Jonathan Mendelsohn, Eryc Prydz among others. As a producer, his tracks are known for being comercial and catchy and work well in all the dance floors. The most successful are Legend, Take my hand, Big Bang, Stay with me, Hot Diana, One more chance or

Mohicano. Thanks to all this work he's become one of the most important dj's in Spain and his international recognition is growing quickly