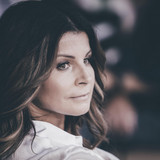 Carola Haggkvist, better known as Carola, was one of Sweden's most popular and enduring schlager singers for well over 20 years. Representing Sweden in the Eurovision contest on several occasions, Carola famously won the competition by a slim margin in 1991 with the song "Fangad Av En Stormvind." Carola broke onto the Swedish music scene in 1977, when her victory at a local talent show led to an appearance on national television. She caught the attention of promoter Bert Karlsson a few years later, and he pressed her to participate in the 1982 Melodifestivalen competition. She declined, opting instead to record an album with the Swedish metal group Standby. Carola didn't resist the lure of the song contest circuit for long, however, entering Melodifestivalen in 1983 with "Framling" (Stranger). The song was a smash hit, and Carola went on to represent Sweden in the Eurovision Song Contest. She came in third and returned to Sweden a star. Her debut solo album, Framling, soared to number one on the Swedish charts and remained there for over 12 weeks. Several more chart-topping albums followed over the course of the next seven years, including a collaboration with the Bee Gees called Runaway. Carola returned to Melodifestivalen in 1990 with the song "Mitt I Ett Aventyr," placing second in the competition. Never one to be content with second place, Carola returned the following year and snagged first place with "Fangad Av En Stormvind," a victory that sent her back to the Eurovision contest for the second time in a decade. Carola and "Fangad Av En Stormvind" ended up tying for first place with France (represented by Amina); the judges eventually deemed Carola the winner after counting the number of "twelves" and "elevens" each singer earned in the competition. Over the next two years, Carola traveled to China and recorded her first gospel album, My Tribute, which was released in 1993. A dozen more albums, secular and gospel, followed over the course of the next 15 years. Carola returned to Eurovision in 2006 with the song "Invincible," and went on to place fourth in the contest. ~ TiVo Staff, Rovi