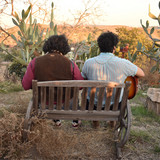 “Invigorating”, “brilliant”, “reckless”, and “charismatic” are just a slew of the adjectives used to describe the now two-year-old Tropa Magica. Initially fated to fail the Pacheco brothers proved that starting anew was not an otherworldly task. The brothers immediately rebranded and released a self titled debut LP with appraisal by Buzzbands LA and KCRW’s Jose Galvan, who ranked it as one of his top 10 albums of 2018.

Having toured nationally and on multiple southwest and west coast tours, Tropa Magica have supported established acts such as Chicano Batman, La Sonora Dinamita, and comedian Felipe Ezparsa. The band has boldly and successfully taken on larger LA stages at venues such as The Microsoft Theater, El Rey Theater and The Hollywood Palladium.   In 2018 and 2019 Tropa Magica performed at So-Cal festival favorites “Desert Daze” and “Tropicalia”. Despite the pandemic, 2020 has been a fruitful year for the band. They wrote and recorded the theme song for comedian Felipe Esparza’s new Netflix special. They collaborated with the notorious Foo’s Gone Wild Instagram page on the “Foo Files Cumbia” track that was released earlier this year. Lastly, Tropa Magica has released their new sophomore album. The album is a reminder that despite adversity the band is still a powerhouse writing machine. Produced by brother David Pacheco the album reaches new ambitious heights that will garner attention for the brothers as not only a “live band”