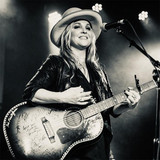 Sunny Sweeney makes it look easy. Just as comfortable commanding a stadium stage on tour with Bob Seger as she is pouring her heart out from a listening-room stool, she is an outlier: A humble East Texas kid with super-star chops, singing her own songs made up of equal parts wit, soul, and hard truth. Four albums into a career that has earned praise from Rolling Stone, NPR, American Songwriter, and more, Sunny has drawn a loyal following, experienced the major label deal, and ultimately, embraced her independence––and smart country music that likes to have its rock and honky tonk too is that much better for it.

Sunny is currently in the studio at work on her next record which will be released in 2021.