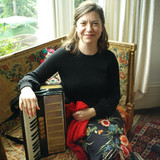 Tara Creme is a composer for concert, film and television, theatre and art installations. Recent film work includes features Seahorse, March for Dignity and My Friend the Polish Girl. Last year BIFA named her in their Top Five Female Composers.

Tara has had her music played on Radio 3, Mark Kermode’s Scala Radio show, and Soho Radio. As a concert composer, Tara has written for small and large-scale ensembles. As well as an oboe concerto written for John Anderson of the Royal Philharmonic Orchestra, she has had concert works performed by Hackney Singers at the Union Chapel, Assembly at New Works Festival, Kamilla Arku at Borough New Music and London COMA. Her piano suite Approach (2019) was recently performed by Charles Owen at New Walk Museum, in a commission for Leicester International Festival of Music Lunchtime Concert Series. Her string trio Green Deva will be premiered by Hebrides Ensemble at St Magnus International Festival. She is currently composing a long-term project, a major oratorio based on the life of Joan of Arc; in August 2019 she was selected by Wild Plum Arts for a Made at the Red House residency at the Britten-Pears Foundation to work on this. Her theatre work includes the music and sound design for Something Somatic (TheatreScience), People are Messy (Theatre of Debate) and King Charles III for Tower Theatre. She has also created several music/visual art crossover pieces.