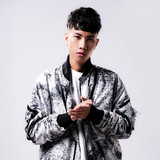 Hoaprox (stage name of Nguyen Thai Hoa), is the youngest winner of The Remix New Generation 2017 competition on national TV and with it the title of No/1 Producer/DJ in Vietnam.   His dexterity in producing across multiple electronic music genres including Progressive House, Future Bass, Trap, Big room, Bounce, Dubstep, Nudisco and Future House has given him great versatility yet he retains the artistry to make each song radiate with his charismatic style and personality.  At age 14, while his peers were all playing computer games, he was already displaying his distinct individual personality by exploring music production on his computer. He then developed his talent for producing music at 15 and within 2 years, Hoaprox had become a musical phenomenon in Vietnam and soon his influence would spread to the rest of Asia. In China, his song, ‘’Ngau Hung’’ soon reached iconic status in the gaming world with more than 2 Billion of streams with Hoaprox being ranked one of the top artists on leading Chinese music streaming service, NetEase Cloud Music.  email: contact@techbeat.vn