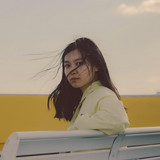 Long Beard is the recording project and pseudonym of New Jersey musician Leslie Bear. What started with a couple of self-released, home-recorded demo tapes circulating New Brunswick basements would culminate with her debut full-length, “Sleepwalker” — released in the fall of 2015 on Team Love Records. Recorded piecemeal over several years in old bedrooms and even a small studio, “Sleepwalker” thrives in its dedication to sound experiments and candid, poetic lyrical reflections, pulling effortlessly from a myriad of folk, ambient, and pop styles. A self-taught guitarist, Leslie’s playing may bring to mind the fingerstylings of American Primitive Music — crossed with the melodicism and melancholy of early 90’s indie rock. Adjoined with the heavenly power of her voice, her songwriting seems to create an effect of levitation, with chord changes that ebb and flow like the coming and passing of waves. An obsession with the psychology of loops and palindromes has also informed Leslie’s songs, which navigate themes of self-doubt, ego death, empathy and nostalgia with a keen knack for melody that turns inward on itself but never collapses —instead floating above its arrangements and exhibiting a sense of hope in the murk. The result is a sort of musical anesthetic that tucks away the harshness of the day and invites you to take a dip, swim deep, and enter a slumber.