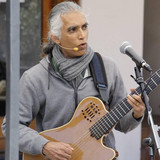 Mathew Joseph is a singer-songwriter and performer of guitar driven world fusion music. On stage he weaves unique patterns of sound with his fingerstyle guitar technique riding software synths and syncopated ethnic drum beats. His music is influenced by his many travels from his roots in Kerala to the high Himalayas and overseas to North America, Bermuda and Cuba. He has recorded two albums - “Firefly” in 2004 recorded in Austin, Texas and New York city and “Eclectia” in 2006, self-produced in his Bermuda project studio. Songs and instrumentals from these albums have seen success in international competitions. He now lives in Toowoomba in Australia where his music is beginning to seep into the local music scene and beyond. In keeping with his vision for world harmony and peace he is now focused on creating new music blending grooves, rhythms and patterns from many different cultures and traditions that highlight humanity’s oneness in diversity.