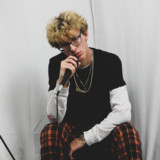 #GRIFFGANGWORLDWIDE   Jgriff is a 22 year-old artist out of Pennsylvania. Although his music journey hasn’t been long, he’s been persistent enough to make major strides in the music scene. He’s collaborated with artists like Futuristic, Gawne, Charles Infamous, J-Wright, Jerome The Prince, & many others. He co-wrote an Amazon #1 Best Seller called “Fame & Fortune in the Music Industry" that charted higher than Russ and 50 Cent in the Rap catagory. While continuing the momentum, Jgriff is releasing at least a song a month leading up to the release of his next project.  https://amap.to/jgriff/ www.griffgangworldwide.com