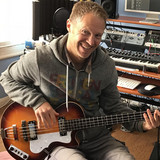 From choir boy to touring session musician to multi instrumentalist experimental artist. After a year studying Jazz at Chichester college(2000), Mark joined a number of signed bands as a touring session musician. Mark was the touring keyboard player for Blue States(Memphis Industries/XL Recordings), Geoffrey Williams(Atlantic Records), Astrid Williamson(One Little Indian), and Mangataot(Tru Thoughts) providing the opportunity to play in some amazing places, such as The Albert Hall, Hammersmith Apollo, Manchester Apollo, Belfast Waterfront Hall, The SECC Glasgow, The Exit Festival in Serbia, and venues all over the US, Spain, France and Ireland. In between touring, Mark started his own recording studio, recording local Brighton based acts that Mark was affiliated with, as well as recording other prominent local bands, such as The Hat(Sunday Best) Mark loves harmony and the meeting of electronic and acoustic sounds.