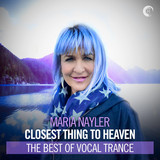 Maria Nayler is a British recording artist, vocal coach and songwriter. She began her music career, with her then band, Ultraviolet, whom released two singles in the very early 90s, including “Kites” and “I Wish That”. Maria then went on to provide vocals for “Ladies With an Attitude” by Epitome of Hype, which sampled lines from Madonna’s hit single, “Vogue”. “Ladies With an Attitude” became a success on the underground scene, garnering attention for Maria. After a string of singles with Clusterfunk (“Do Me Right”, “Deep Down”), Maria was in the studio with major DJ/producer, Sasha, for the recording of the single, “Be As One”, which went on to be a major hit for the duo, peaking at #17 on the official UK charts in 1995. A year later, and Maria was making waves on the music scene once again, with the smash hit single, “One and One”, with the late Robert Miles. The duo

scored #1 on the music charts in several European countries, including Belgium, Israel, Italy, Romania, Scotland, The Eurocharts Hot 100 and the US Dance Chart, as well as reaching an impressive #3 IN