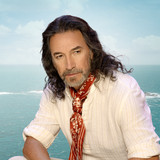 Marco Antonio Solís is without question one of the most important figures in the rise of Mexican and Latin music to world prominence during the last two decades of the 20th century. Born in Michoacan, Mexico, Solís was only 12 when he formed his first group, Los Hermanitos Solís, with brother Joel. He was still a teenager when he formed Los Bukis in the early '70s. Over the course of the next two decades, Los Bukis came to profoundly influence the norteño and tejano music of Mexico and the southwestern United States. Though Solís continued to work closely with Los Bukis, he also initiated a solo career that resulted in platinum certifications for mid-'90s LPs such as Quiereme, Inalcanzable, and Por Amor a Mi Pueblo. Trozos de Mi Alma followed in 1999. Solís ushered in the new millennium with a two-volume live set, En Vivo, and its companion, En Vivo, Vol. 2. His next studio album, Mas de Mi Alma, was released in 2001 and, like his previous solo albums, became a best-seller. Even though he didn't release another proper album until 2003, Solís remained a chart favorite with several songs from Mas de Mi Alma (including "Cuando Te Acuerdes de Mi" and "Si No Te Hubieras Ido") making appearances on Billboard's Latin charts. Released in May of 2003, Tu Amor o Tu Desprecio slowly made its way to the top of the charts until reaching number one in early 2004. The best-of collection La Historia Continúa... appeared by the end of 2003, followed the next spring by the split album (alongside Joan Sebastían) Dos Grandes. Razon de Sobra was also released by the year's end. The second part to his La Historia Continúa... was issued in 2005, as was a release with tejano singer Pepe Aguilar. The well-received Trozos de Mi Alma, Vol. 2 hit shelves in 2006; it quickly topped the Latin album charts, produced a hit in "Antes de Que Te Vayas," and earned Solís a Grammy nomination for Best Latin Pop Album. The artist issued the live Noche en Madrid in June of 2008, followed a scant five months later by his eighth studio offering, No Molestar. Both albums hit the top spot on the Latin albums chart. After a short break, Solis was back in the studio. En Total Plenitud was released in 2010 and became his tenth consecutive record to hit number one on the Latin albums chart, setting a record. Its single "A Dónde Vamos a Parar" was featured in the telenovela Theresa, and the album reached platinum status in sales. Solis toured globally in support of the album for over a year. Upon the tour's conclusion, he returned to recording almost immediately. The single and video for "Tres Semanas" were released in the summer of 2013, followed by a second pre-release single and video for "De Mil Amores" in early 2014. The studio album Gracias por Estar Aquí appeared in April 2014, and was nominated for Best Traditional Pop Vocal Album at that year's Latin Grammy Awards, with "De Mil Amores" winning the award for Best Regional Song. The recording was also nominated for Best Latin Pop Album at the 57th Grammy Awards show. It was also his last album for a Universal affiliate label. Solis then went indie, and his deluxe live project, Por Amor a Morelia Michoacan, was titled for the city of his birth. Recorded in 2012 as an audio and video disc package, it was prefaced by the medley single "Mi Mayor Necesidad"/"A Donde Vayas" in March 2015, while the album appeared in various packages in April of that year. ~ John Bush, Rovi