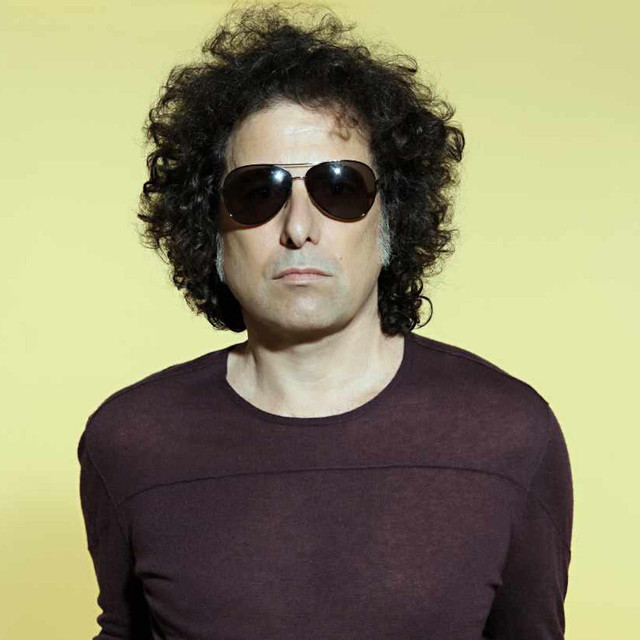 Andres Calamaro is one of the most popular Argentinian pop/rock songwriters, and considers himself a song craftsman. Born in 1961, he began his professional musical career at the age of 17 playing keyboards in Raíces. In 1981 he joined one of the main bands of the '80s Argentinian rock scene, los Abuelos de la Nada. Although the band was led by the brilliant Miguel Abuelo, Calamaro composed most of the group's hits, including "Mil Horas," "Así Es el Calor," "Sin Gamulán," and "Costumbres Argentinas." In 1984, he made his solo debut with Hotel Calamaro. The album was a bizarre mix of styles and musicians, and it didn't gain much public or press support. In 1985, Calamaro left los Abuelos de la Nada and recorded his second album, Vida Cruel. Despite the presence of important musicians and guests such as Luis Alberto Spinetta and Charly García, the album was a disappointment both commercially and artistically. Although Calamaro appeared to be out of luck as a songwriter, he had an intense and successful run as a producer for bands like los Enanitos Verdes, los Fabulosos Cadillacs, and Don Cornelio y la Zona. He also worked and collaborated with many artists of different styles and genres, a constant goal throughout his whole career. Calamaro's third album, Por Mirarte, found him in better form fronting an established band. Released in 1988, it contains some outstanding songs such as "Con los Dientes Apretados" and "Me Olvidé de los Demás," while other songs like "Cartas Sin Marcar" and "Loco por Tí" helped the album gain popularity. When Calamaro released Nadie Sale Vivo de Aquí in 1989, Argentina was struggling in the midst of a difficult economic crisis; consequently, few albums were released, and the production of Nadie Sale suffered. Calamaro left Argentina and settled in Spain, following a road taken by many Argentinian rockers. There he met Ariel Rot and Julian Infante, former members of Tequila. They formed los Rodríguez in 1991, a pop/rock band that was very popular in Spain and Latin America. Calamaro's songs became popular in the early '80s, and the hitmaker was back on the road again. Curiously, working from Spain, he was conquering Argentina. While performing with los Rodríguez, he didn't release any new solo material, just Grabaciones Encontradas, Vols. 1 & 2, a couple of CDs that contained unreleased and rare material from the '80s. After los Rodríguez split, Calamaro returned to his solo career, recording Alta Suciedad in 1997, an album produced by Joe Blaney. Alta Suciedad brought him the commercial success that had previously eluded his solo endeavors, and it sold 300,000 copies in Argentina alone, certainly a huge number considering that country's small market. No doubt, Alta Suciedad put him in the big leagues, alongside other Latin legends on the national rock scene. Before that album, Calamaro was considered an important character, appreciated by the other musicians, but not by the popular culture at large. After breaking up with his Spanish girlfriend, he released the double-CD Honestidad Brutal in 1999. Recorded when he was 37, it contained 37 songs of despair, love lost, drugs, and regret. It was not as successful as the previous album, but showed a new Calamaro: desperate, decadent, and often elegant at the same time, with a new and raw lyrical approach. El Salmon followed in spring 2001: A mammoth five-disc set of 103 songs (reportedly culled from over 400 written during the previous year); 80-percent were previously unreleased original compositions, with the remaining 20-percent being covers from the most disparate sources -- from the Beatles and the Rolling Stones to tango and other Argentine folk music, along with new versions of a few of his own songs. At the time, the set was largely deemed a chaotic shambles; evidence of the ramblings of a drugged mind, and of a writing/recording obsessive-compulsive disorder. It was considered commercial suicide. Throughout 2001 and 2002, Calamaro released a number of free downloads, as well as giving fans permission to remaster his works. He returned to the studio for El Cantante in 2004 and released a live album, El Regreso, the following year. His next studio album was La Lengua Popular, released in 2007, which was immersed in cumbia. The following year, Calamaro released the live album 2 Son Multitud, which was recorded in Getafe, Spain with Fito & Fitipaldis. Nada Se Pierde followed in 2009 before the singer released On the Rock, his 20th studio album, in 2010. To commemorate the tenth anniversary of El Salmon, the songwriter issued Salmonalipsis Now, which stripped the box set's bedlam down to two discs and 54 songs, with 49 present in original versions, and five new tracks culled from the same marathon sessions. Perversely, and thus in keeping with the chaotic spirit of the project, tracks are sequenced in a completely and seemingly random new order, thus disrupting the original flow. Critics deemed it an excellent compendium of one of the most bizarre and fascinating releases in Rock en Español history. Following its release, Calamaro released some 2,000 songs to Soundcloud. In 2013, the songwriter surprised audiences with Bohemio, showcasing a brand new band in a collection of ten new songs produced by CachorroLopez (who helmed the sessions for La Lengua Popular. Regarded by critics and audiences alike as his best recording since his last collaboration with the producer, it sold exceptionally well, riding the Top Ten of the Spanish charts for weeks. The followingyear, Calamaro issued a pair of live albums -- Jamon del Medio and Purasangre -- and undertook a tour opening for longtime friend, Spanish rocker Enrique Bunbury. The encores of all those shows featured the two men performing together backed by Bunbury's band. The ten songs they performed were issued as Hijos del Pueblo in 2015. The following year saw the release of Romaphonic Sessions, on which he was accompanied only by pianist German Wiedemer. In truth, the album was merely a demo that Calamaro presented to film director Fernando Trueba to convince him to produce an album. Comprised of tangos, a cover of Litto Nebbia's "New Zamba para Mi Tierra" and stripped-down rearrangements of his own songs, the director turned him down, assuring the songwriter it was already complete.

Calamaro followed it the same year by releasing Volumen 11 -- to signify maximum volume -- that collected a wide variety of 18 songs from between 2012 and 2016. It served as an entry in Grabaciones Encontradas (Found Recordings) series. For Record Store Day 2017, he issued the four-song vinyl EP Licencia Para Cantar, recorded with Wiedemer, Tono Miguel, and Martin Bruhn. In 2018, he collaborated with Lila Downs on a reading of "En El Ultimo Trago" for the tribute album Mundo Raro: Las Canciones de José Alfredo Jiménez, to commemorate the great ranchera songwriter's 70th birthday -- he'd passed on a year earlier. The track was one of its pre-release singles along with "Te Solte La Riendar" by Julietta Venegas. Produced by Camilo Lara and recorded in Mexico City, Monterrey, Los Angeles, Buenos Aires, Barcelona, Madrid, and Texas, it featured 13 tracks from a wide variety of artists including Bunbury, Carla Morrison, Beto Cuevas, and David Hidalgo of Los Lobos. ~ Iván Adaime, Rovi