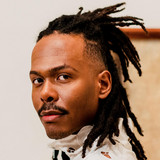 The seeds to Jeangu Macrooy’s journey are planted when he receives a guitar at age thirteen. However, his musical ambition turns out to be bigger than the music scene in his native Suriname, leading to his move to The Netherlands in 2014. There he meets producer/composer Perquisite, who becomes his musical collaborator. In 2016 Jeangu's debut-EP 'Brave Enough' is being released and his career finds itself on the fast track: he becomes a recurring guest on Dutch TV and is nominated for the Edison Award 'Best New Artist'. Jeangu’s debut album High on You (2017) brings Jeangu and his band to major live slots at Lowlands Festival, Eurosonic and North Sea Jazz and also his second album Horizon (2019) receives lots of critical acclaim. Early 2020 it was announced that Jeangu Macrooy was selected to represent The Netherlands at the Eurovision Song Contest 2020. Unfortunately Eurovision was cancelled due to the Covid-19 pandemic. However, Jeangu will participate in Eurovision 2021 with his new song 'Birth Of A New Age'. A few years into his career, now a household name in The Netherlands, Jeangu is on a journey that allows him to grow closer to his true musical form. He has improved his ability to realize his musical ideas, and explores the possibilities for his music together with his long-term producer Perquisite. He is currently working on his third studio album.