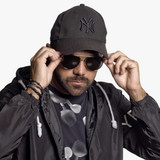 Jerry has been presented throughout the world including important countries for electronic music such as USA, Great Britain, France, Spain and Belgium, where he participated in the internationally known “Daydream Festival” for two years as well as in the “Daydream Mexico” edition.

Recently presented in the first edition of “Wish Outdoor” in Italy and “Medusa Sunbeach” at Valencia, Spain and the first edition of “Medusa Festival Mexico”, “Dammove Fest”, “ACA Beat”, “Victorious Music Festival”, Barcelona Beach Festival, Ostend Festival, Tomorrowland (2019), among many others. With the experience of having worked with renowned DJs / Producers like Paul van Dyk, Carl Cox, David Morales, Sasha and Darren Lee, Jerry Davila is one of the DJs and producers with the best credentials in both the underground and mainstream scene, over 200 edits, 3 compilations of music in the official discs of Dammove Fest, Daydream and Medusa, co-producer of Daydream's anthem collaborating with Tara Mc Donald and Medusa with Nils Van Zandt, Dj Pelos and Nicky Dae entering with this in lists of popularity in Mexico and Belgium. In 2018 Jerry Davila acted as Dj in the series for Netflix "Sunset Confidentials" by director Robert Arevalo. Partner & Founder of the Dutch Crown Records Record Label.