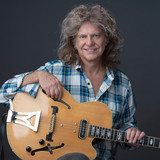 Since arriving on the jazz scene as an adolescent in the mid-'70s with Gary Burton, guitarist, composer, and bandleader Pat Metheny has established himself as one of the most original jazz musicians in the world. He has won 20 Grammy Awards, and is the only artist to do so in ten different categories. A consummate stylist and risk-taker, he melds a singular, euphoric sense of harmony with Latin and Brazilian sounds, rock, and global folk musics into progressive and contemporary jazz. His 1976 ECM debut, Bright Size Life with bassist Jaco Pastorius and drummer Bob Moses, and the self-titled Pat Metheny Group two years later, resonated with audiences and critics for their reliance on euphoric harmonies and compelling rhythmic ideas. 1981's As Falls Witchita, So Falls Witchita Falls, with longtime musical partner, keyboardist Lyle Mays, topped the jazz charts. The Pat Metheny Group won its first Grammy for Best Jazz Fusion Performance for 1982's Offramp. The Metheny Group and Ornette Coleman cut Song X, as the guitarist's Geffen debut in 1986. The PMG earned consecutive gold record certifications in 1987 for Still Life (Talking) and Letter from Home in 1989. 1992's Secret Story offered a dazzling collaboration between PMG, the Pinpeat Orchestra, the London Orchestra, the Choir of the Cambodian Royal Palace, and Toots Thielemans. (All 13 PMG albums charted inside the Top 200.) Metheny's 2011 solo guitar album, What's It All About, took home a Grammy in the Best New Age Album category. The guitarist's Unity Band, with Chris Potter on saxophone and bass clarinet, Ben Williams on bass, and Antonio Sánchez on drums, won a Grammy for Best Jazz Instrumental album in 2013. Metheny expanded the group into a quintet for the following year's Kin. Since 2018, the guitarist has been touring in a quartet with pianist Gwilym Simcock, Sanchez, and bassist Linda May Han Oh. Metheny is from Lee Falls, Missouri (his older brother is the trumpeter Mike Metheny) and initially played trumpet. After coming under the sway of the Beatles in 1964, he eventually moved over to guitar when he was 12. His talent developed quickly. He taught at both the University of Miami and Berklee while he was a teenager, and made his recording debut with Paul Bley and Jaco Pastorius in 1974. He spent an important period (1974-1977) with Gary Burton's group, met keyboardist Lyle Mays, and in 1978 formed his own group, which originally featured Mays, bassist Mark Egan, and drummer Dan Gottlieb. Within a short period, he was ECM's top artist and one of the most popular of all jazzmen, selling out stadiums. Metheny mostly avoided playing predictable music, and his freelance projects were always quite interesting. His 1980 album 80/81 featured Dewey Redman and Mike Brecker in a post-bop quintet; he teamed up with Charlie Haden and Billy Higgins on a trio date in 1983; and two years later recorded the very outside Song X with Ornette Coleman. Metheny's other projects away from the group have included a sideman role with Sonny Rollins, a 1990 tour with Herbie Hancock in a quartet, a trio album with Dave Holland and Roy Haynes, and a collaboration with Joshua Redman. Although his 1994 recording Zero Tolerance for Silence baffled his audience with its completely experimental approach to noise and feedback, Metheny retained his popularity as a consistently creative performer. In 1994, he made his Blue Note debut with John Scofield on I Can See Your House from Here, and followed it up the next year with the Pat Metheny Group's We Live Here, 1996's Quartet for Geffen, and the score for the film Passaggio Per Il Paradiso. In 1997, he and Charlie Haden cut the acoustic duo album Beyond the Missouri Sky (Short Stories), before the guitarist signed to Warner Bros. and released Imaginary Day. In 1999, the duet set Jim Hall & Pat Metheny was issued as a one-off for Telarc, while Metheny's score and soundtrack for A Map of the World appeared from Warner Bros. the same year. Metheny has remained intensely active in the 21st century, releasing Speaking of Now in 2002, the acoustic solo album One Quiet Night in 2003, the PMG's Way Up in 2005, and Metheny Mehldau in 2006. Metheny and pianist Brad Mehldau returned to the studio the following year for Quartet. Metheny released the trio album Day Trip in 2008. Orchestrion -- which featured him solo playing several acoustic instruments designed and built for him by Eric Singer -- appeared from Nonesuch early in 2010. He released What's It All About in June of 2011, his second solo acoustic guitar recording for the label. Unlike any other entry in his large catalog, the set is entirely comprised of covers of pop songs by contemporary songwriters (from Paul Simon and Lennon and McCartney to Antonio Carlos Jobim, Burt Bacharach, and Hal David) that have held meaning for him throughout his career. Metheny released Unity Band with saxophonist Chris Potter, drummer Antonio Sanchez, and bassist Ben Williams in June of 2012. In August, the promised live The Orchestrion Project was released; it was a CD and DVD document of the one-man tour with the symphonic machine in 2010-2011. In the spring of 2013, Metheny recorded the work of composer John Zorn on Tap: John Zorn's Book of Angels, Vol. 20 on the Tzadik (owned by the composer) and Nonesuch labels simultaneously. Metheny's Unity Group continued to tour, and in 2013 reentered the studio. Kin <---->, their second offering, was released in February of 2014. In January of 2015, Metheny was part of a tribute to bassist Eberhard Weber, who suffered a debilitating stroke in 2007 and has not performed since. The evening featured works written and inspired by the bassist, played by various groupings of musicians and the SWR Big Band. Co-billed to the guitarist, saxophonist Jan Garbarek, and vibraphonist Gary Burton, it was released on ECM as Hommage a Eberhard Weber in September. Metheny then delivered the live album Unity Sessions and paired with trumpeter Cuong Vu for 2016's Cuong Vu Trio Meets Pat Metheny. Almost immediately afterward, Metheny assembled a quartet with Sanchez, Malaysian/Australian bassist Linda May Han Oh, and pianist Gwilym Simcock. This group toured the globe for two years before

making their recorded debut with From This Place in February of 2020. In addition to the quartet, it included contributions from the Hollywood Studio Symphony conducted by Joel McNeely, vocalist Meshell Ndegeocello, Swiss harmonicist Gregoire Maret, and Cuban percussionist Luis Conte. ~ Scott Yanow, Rovi