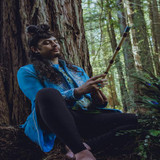 Māh Ze Tār (2015) is a musical fusion project by vocalist and multi-instrumentalist Maz Karandish. This project was propelled by the vision of fusing traditional Eastern music with modern electronic composition as a form of cultural preservation. His first album, “Liquid Lotus” (2018), is a 9 track sound journey featuring gliding vocals and the Indian Sitar presented within an experimental electronic Raga format. Mah Ze Tar’s latest album, “Roots” (2020), features Persian instruments and classical melodies reimagined from a bass-heavy electronic perspective. Maz plans to release his next album, “Diversity”, in 2022. This album will be the debut of his psychedelic world rock project, which he has been envisioning for the past decade. Maz Karandish is a devotee of music: A vocalist and multi-instrumentalist covering grounds from Raga, Maqam, and Dastgah to Harmony, Jazz, and Opera. He has been studying music from a very young age and has spent extensive time exploring world music within each of their respective traditions over the past two decades. Maz utilizes his voice in addition to about a dozen instruments to bring the various forms of music to life. He is currently most active in exploring the sitar as it is expressed and understood within the Imdad-Khani tradition while maintaining his connection to his roots through Persian Classical and Folk music. For more information please visit http://MahZeTar.com/