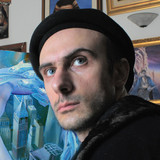 Devoted to the "multimedianic" quest for the “over-human” identity hidden in the infinite stream of delusions cocooning humankind, AFAN Alessandro Fantini's musical journey can be hardly described with the terms of a conventional sound experience. His approach to instruments and electronic devices is intuitive and irrational as well as the visions and the concrete delirium he captures on canvas and video. Since his childhood he translated his "lucid dreams" in drawings and paintings containing the seed of silent soundtracks of unconsciousness. While keeping painting, writing and directing videos, after some years as leading voice and song writer in the art-rock bands "AFICION" and "SALVADOR BARRETT", in 2003 he embarked in a independent career of singer and composer. Nowadays he keeps composing concept albums, bewitching soundscapes and soundtracks for his movies and exhibitions."Listening to the Vision and watching the Sound" is his motto.