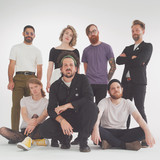 The Collection is a 2019 NPR Tiny Desk Judge’s Pick and has released 3 records independently. Their raucous live show has drawn accolades nationwide and has seen them touring with pals The Oh Hellos and on various festival side stages - steadily making waves with each new record. With touring at a halt the band has spent their downtime this year as we all have: adjusting and tweaking their routines to the times; trying - as a lot of bands are - to figure out what being in a band, recording and making music together even is during these times.