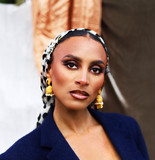 Sallay-Matu Garnett is an Irish-Sierra Leonean singer-songwriter who performs and records under the name Loah. With her unique blend of Afro-soul, she released her debut EP This Heart in 2017 followed by an entire EP of remixes in 2018. She has toured in Ireland, the UK, Sierra Leone and the USA and has held major slots at festivals including Electric Picnic, Body & Soul, Longitude, Cork Jazz Festival, Sounds from a Safe Harbour, the Dublin Fringe Festival, Centre Culturel Irlandais Paris and SXSW. In 2019 she released a number of musical collaborations with Irish producers, including Fehdah and Bantum, as well as starring as Mary Magdalene in Andrew Lloyd Webber and Tim Rice’s iconic Jesus Christ Superstar at the Barbican, London. In 2020 she released an EP of songs written with Corkonian producer Bantum. She also dropped a surprise collab, Birthmark, made in isolation with guidance from Queens rapper Bas and with production by Ron Gilmore (J Cole, Lauryn Hill, Ari Lennox) . 2021 sees her release a mini-album of poetry from the 1920s set to largely acoustic music, written during lockdown in Ireland.