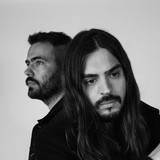 Thomas Mullarney III and Jacob Gossett met the first day of classes at Pratt Institute in Brooklyn, where the pair were studying sculpture and painting respectively. Since then, the duo have established a singular musical and aesthetic vision under the name Beacon, with releases on labels that include Ghostly, Kompakt, and Anjunadeep. In early 2020, after finishing the last date of the their European tour in Bucharest, Romania, Mullarney III and Gossett returned home to the new reality of the pandemic and began writing their fourth record. That year also saw a new commissioned work for fashion brand Balenciaga as well as an unreleased original song used by Apple to launch the new MacBook Pro (“Show Me How”). On June 29 2021, the band released Gambler, the first release on publisher Heavy Duty's new Best Of imprint. It is the first hint of music from the forthcoming full-length LP. Gambler begins with a haunted Vaudeville piano, recorded on the band’s studio upright. Thomas Mullarney III’s lyrics, “Darling, you’re living in a violent way,” forecast the arrival of the song's chorus: a maelstrom of 808s, arpeggiated synths and punctuated noise.