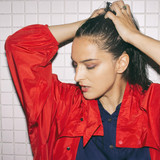 is a Slovak singer, songwriter and multiple award winner across several music genres. In 1996 she released her first album Jana Kirschner, however, it was her second record - "V cudzom meste", which brought Jana Kirschner widespread recognition and popularity in Slovakia and later in Czech Republic. She won four ZAI Awards including the New Artist of the Year (1997), Album and Music Artist of the Year respectively (1999), and Female Singer of the Year (2000). [n 1999, she topped the local Slávik poll–based awards. In the years 2003 and 2007, she won two Aurel Awards as Female Singer of the Year. In 2013 and 2014, Jana Kirschner released a two-album project titled Moruša: Biela and Moruša: Čierna produced by UK musician, composer and arranger Eddie Stevens.The tracks from both albums were brought to life again in 2015 on the album Moruša: Remixed which contains 12 songs remixed by various producers from Central Europe.