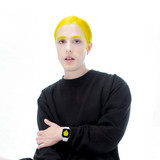 Hailing from Čačak, a mysterious city nested in Central Serbia, Luke Black has been named by the media as “The Serbian Pop Alchemist” for his songwriting ability, putting together distinctive live performances, channeling modern mysticism and bringing a unique sound with timeless quality. Creating fresh crossover melodies, Luke uses classic pop influences as his canvas which he then paints over with retro, electronic and indie sounds. This reflects the broad spectrum of Luke’s influences which include evergreen pop rock

artists as Queen, Elton John, Stromae and Lady Gaga on one hand and, interestingly, cabare and opera singers such as Vitas, Maria Callas, Eartha Kitt on the other hand. After moving to London, Luke was surrounded and inspired by friends and creatives who he met exploring London’s underground scene. Luke is driven to shape his own destiny - working tirelessly to create his music which is, at its heart, authentic and creative with story-telling wrapped in cinematic sounds of nostalgia meets the future. After a hugely successful sold out Tour in China in 2016, Luke performed in BERGHAIN Berlin - the most famous club for electronic music in the World - at one of the legendary parties thrown by the Electronic label Afterlife. LUKE is coming back on April 23rd 2021, release date set for the new single "a house on the hill"