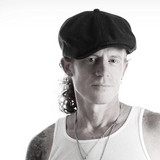 Chasen Hampton is a 5th generation, Oklahoma soul singer/songwriter. Establishing himself early at age 11 as an original member & eventual co-host of famed 90's television series "The Mickey Mouse Club" on The Disney Channel. He then went on to sign to Hollywood Records as a recording artist beginning his music career w/the pop group The Party. Through the 90's the group toured the world w/ Taylor Dayne, Color Me Badd, Vanilla Ice & Hi-Five & was produced by all-stars such as Teddy Riley , Dr. Dre, André Cymone & Pharrell Williams . Chasen has guest stared on shows X-Files, Buffy The Vampire Slayer, Sabrina The Teenage Witch, 7th Heaven & The Rules of Attraction. His voice can be heard on some of the worlds most iconic brands Coca-Cola, Pepsi, Expedia, 7/11, Kia & singing backgrounds for some of Hollywood's elite.

He attended Berklee for Artist mgt. is a mentor & staunch supporter of music education. @www.CHASENLIFE.COM **New Single Alert** 05/28/21 "Nobody" born out out of all we've had to endure and survive through alone this last year, a reminder to me just how resilient we are and can be. That we don't need ANYONE to validate us to accomplish ANYTHING. My favorite line in the bridge sings "You Can't Hold Me Down, As Long As I Can Dream I'll Be Run-in 'Em Down". I wrote as a motivator to myself to get up, get out there & start swinging..NO EXCUSES!