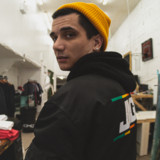 Bdice is a multi-medium artist from Vancouver, Canada.  Playing the roles of musician, director, editor, engineer, designer, marketer and more, Bdice is one artist that is independent by definition. His newest release "Aesthetic" has already accumulated over 1 million streams on Spotify and his collaborative music efforts have led to collaborations with popular video game "Torque Drift" the official drifting game of Formula D, as well as music featured in Academy Award-Winning Director Jordan Peele’s TV series "Weird City”   Bdice began his career posting a song and video everyday for 365 days branded as the "Daily 16", an ambitious endeavour that would bring the first million views to his YouTube channel.   Behind the scenes he is notably responsible for gold-selling recordings as a Producer / Engineer & 30M+ Views as a video director.