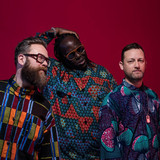 The Invisible create a thick but satisfying musical stew from their cerebral blend of art rock, post-punk, funk, dance-pop, and Afro-beat. The London trio began when singer/guitarist Dave Okumu tapped bassist Tom Herbert and drummer Leo Taylor for a 2006 solo project. The trio swiftly gelled; realizing themselves as a unit, they took the name the Invisible and were snapped up by Accidental Records, run by Matthew Herbert, who also took the production reins on the group's debut album. Released in the U.K. in 2009, the hard-to-peg record received almost universally stellar reviews from the British press, and earned the act a position on that year's Mercury Prize short list. The Invisible signed to Ninja Tune for their 2012 sophomore album, Rispah, and their third full-length, Patience, which saw release in 2016. The Patience (Remixes) collection arrived the next year. ~ Jason Thurston, Rovi