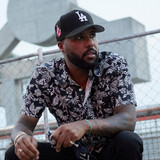 Being a MAJOR player in the Los Angeles rap game for some time now, Leimert Park rap veteran Dominic Hunn, more commonly known as Dom Kennedy, is not only a local fan favorite, but a versatile artist whose fan base spans across the globe. While much of his music depicts his personal life in his hometown, the LA native finds a way to make his narrative relevant and relatable to audiences worldwide. Starting by releasing his first mixtape 25th Hour in 2008, it wasn’t until 2010 when the rising underground star began to get major recognition with the release of ​From the Westside with Love.​ The rapper has collaborated with some of Los Angeles’ finest artist such as Kendrick Lamar, Ty Dolla $ign and Nipsey Hussle, who also have strongholds in the hip-hop game. With a portfolio of seven studio albums, nine mixtapes and music single ranks from Complex, the veteran rapper has long established his roots in the hip-hop community and continues to prove that he is here to stay.