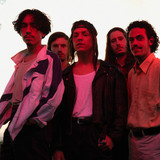 The Zephyr Bones is a psychedelic rock band based in Barcelona, where Brian Silva, Jossip Tkalcic, Marc López and Carlos Ramos met after the first two arrived from their native Chile. In 2015 they released their debut EP, “Wishes/Fishes”, via La Castanya. That first release was then followed by the seven-inch "Black Lips b/w Surrounded by Sunflowers" released by La Castanya and the New York label Other Music Recording Co. When their first LP "Secret Place" arrived in 2017, the band had already coined their own style, “beach wave”. That album —a psychedelia and dream pop hybrid— took them on a tour around the United Kingdom, Europe and the United States, playing on all types of stages. "Neon Body", their sophomore album, expands their sound by exploring the fusion between humanity and machines. A warm and accessible album that speaks about love, self-affirmation, loss and hope.