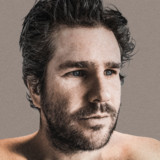 The Elison story should start with a fulfilled desire to play the saxophone at school, but instead starts with a short-lived stint as the chief and only bassoon player in the school orchestra. This led to a lengthy hiatus from music until school was left behind once and for all, although the faintly happy memories of a few lead singing parts in disappointing school shows had a career as a bed and bath crooner almost all but guaranteed. The necessary four guitar chords were learnt and the singing began. The lack of any real talent at this point meant it should have remained a private past time, but the surprising volume put out by this once bass blowing chest caught the attention of a few distant neighbours and their anger suggested at least one thing. The voice was strong.