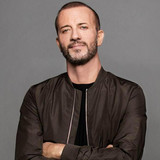 Raffaele Riefoli (born September 29, 1959 in Margherita di Savoia, Italy) is an Italian singer-songwriter who is better known as simply Raf. His first single, "Self Control" was a world hit , Laura Branigan's version was released in 1984 and became a worldwide dance and pop success, hitting No. 4 on the Billboard Hot 100 in the U.S. Branigan's version hit the No. 1 spot in Germany, Austria, Switzerland, Sweden, South Africa and Canada, and was a major hit in Ireland, Australia, France, the Netherlands and the UK. Raf's version, which was charting high in numerous markets in 1984/85, was highly expected to become the most popular song in the history of the Italian music industry.   Raf has released 11 studio albums throughout the years, including the 1993 Cannibali, which has been certified six times platinum in Italy. That album contains many successful tracks including "Il battito animale", "Due" and "Stai con me".   Riefoli has also written songs for other Italian artists; the track "Si può dare di più", written for the trio Morandi-Ruggeri-Tozzi, won the first prize at the San Remo Festival. RAF co-wrote the song "Gente di mare" with Umberto Tozzi and Giancarlo Bigazzi, and his duet with Tozzi became Italy's entry in the Eurovision Song Contest 1987, placing third.   Raf continues to have a successful recording