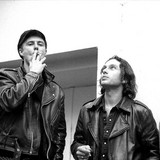 Desert Mountain Tribe released their debut album Either That Or The Moon in the spring of 2016 to positive reviews from UK publications such as Shindig, Classic Rock, Louder Than War, Drowned In Sound and The Arts Desk. In 2015, via the Converse Rubber Tracks recording project, DMT produced a handful of cool and well-received demos that would ultimately assist in finding an album deal with Membran Entertainment Group in Europe/UK, and Metropolis Records in North America. Subsequent releases have included two digital EP¹s, If You Don¹t Know Can You Don¹t Know Köln and Live At St. Pancras Old Church, plus the Youth mixed single Enos In Space (Top Of The World). The band spent much of 2017 on the road, including tours of both North America and mainland Europe, with new drummer Frank van der Ploeg joining the group in the autumn.

“Sheer space rock bedlam.” Clash Music, UK “an astonishingly excellent debut” Big Takeover Mag, NYC Desert Mountain Tribe’s last single of 2017, ‘Interstellar¹ taken from Either That Or The Moon¹, and boasted a superb video directed by Daniel Turner of Sound &amp; Colour, which won a Video of the Year accolade from the UK site Live4Ever and also US magazine Pow: live4ever.uk.com/2017/12/live4evers-best-of-2017-the-music-videos/ &lt;http://live4ever.uk.com/2017/12/live4evers-best-of-2017-the-music-videos/&gt; The band is currently engaged in recording and producing their follow-up album to be released in the late spring of 2018.