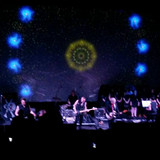 From Manchester, The Membranes unique post punk darkwave music was perfectly captured on their recent 6th album 'What Nature Gives...Nature Takes Away'. The album was critically acclaimed for its epic, brooding

soundscapes. With an added 20 piece choir combined with the band's trademark bass driven songs and strings, it's an imaginative reshaping of their sound that has had many people calling it 'album of the year.' One of the key underground bands in the UK in the 80s, The Membranes have been an influence on scenes as diverse as Grind-core (Napalm Death credit them as starting the scene) and My Bloody Valentine who used to support them and American bands like Sonic Youth, Dinosaur Jnr, Mercury Rev, Big Black