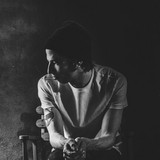 "Erez's world is as lush and green as a British Columbian winter; all of his songs are a calming reminder of the value of occasional escapism" (Portland Mercury)   THE SECRET SEA (Amit Erez) is a cult-status indie icon from Tel Aviv, now living in Portland Oregon. He is one of the first and most influential songwriters to emerge from Israel in the past decade, known for his incredible guitar fingerpicking and emotional delivery. Active since 2003 he has released four albums under his own name. "The Secret Sea" took form as a band led by Erez in 2010. In 2015 Erez relocated to Portland, keeping the band's name as his solo identity. His latest album "Everest" which was self produced, was recorded and mixed at Jackpot Studio by Larry Crane (Elliott Smith, Decemberists, Built To Spill and more).