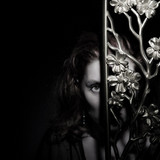 Unlike many of the colder-sounding tunes that are prevalent in electronica music, Halou's sound is infused with plenty of emotion thanks to Rebecca Coseboom's vocals. She is a perfect foil for the compositions of her husband, Ryan Coseboom. The couple started combining their talents in Santa Cruz, CA, in 1992. They migrated several years later to San Francisco and first formed a group called Anymore. Their first recording under the name Halou, We Only Love You, was issued through Bedazzled, a label that soon folded. Because of the label's demise and a lack of adequate distribution, We Only Love You went virtually nowhere, despite healthy critical praise and acceptance by indie radio. Halou's next album, Wiser, found a home at Nettwerk Records and the label issued the release in 2001. The songs on Wiser retained their electronic foundation, but added a twist with the introduction of drums, an acoustic double bass, and a cello. Halou's sophomore album marks the first appearance of Count with the group. He plays drums and co-produced the release, and he also performed the duties of mixer and engineer. He formerly utilized his skills on recordings by New Order, Blackalicious, Deep Blue Something, Philip Steir, Run-D.M.C., and No Doubt. ~ Linda Seida, Rovi