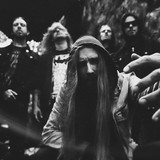 Hailing out of Scandinavia, MASS WORSHIP is a darkened metal band tastefully adding onto the rich legacy of Scandinavian metal with their uniquely heavy and gritty sound. The Stockholm, Sweden based band was officially formed in January 2018, but the members carry a rich history comprising of relentless touring and recording schedules and the future that lies ahead of MASS WORSHIP will be no different. Unleashed on the October 18th 2019 through Century Media Records - the self-titled debut-album gives the listener a glimpse into the world of MASS WORSHIP, and the band is looking forward to taking their heavy riffs out of the Scandinavian darkness onto the road and beyond.