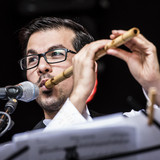 Mohamad Fityan (born 1 August 1984, Aleppo, Syria) is a Syrian musician and composer known for his mastery of the Nay and Kawala. Fityan studied under Mohamad Kassas and Berj Kassis and received his diploma from the Higher Institute of Music in Damascus in 2010. He performed as a Soloist in many countries around the globe with different international orchestras and bands including Syrian National Orchestra, Syrian Jazz Big Band Orchestra, Berliner Symphoniker, Brussels Jazz Orchestra, Bayerische Philharmonie, Fanfare du Loup Orchestra, Codarts & Royal Conservatory Big Band, Sarband Ensemble and others. During his career he has played concerts in Europe, Asia, Northern Africa, the Middle East and the United Arab Emirates. Fityan also participated in various soundtracks for series and movies on the Nay and the Kawala. In 2014 he escaped the civil war in his homeland Syria and came to Berlin, where he found a safe place to live and continue his career as a musician. Since then he has worked with many German musicians, which among other things led to the formation of his own band “Fityan” in 2016. Their first EP “Oriental Space” was recorded in Germany and will be available in the spring 2018. Awards and honors: Best Nay Player Award, Contest of Syrian Youth Musicians in Syria (2002). Best Conductor Award, Contest of Syrian Youth Musicians in Syria (2003). <br>