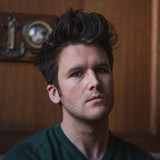 Matt Abbott is a poet, educator and activist from Wakefield, UK (b. 06.01.89). After early success fronting alternative pop act Skint & Demoralised, he returned to spoken word in 2013, and has since gone on to establish himself on the UK's flourishing scene. His début one-man show Two Little Ducks completed a 22-date UK theatre tour in late 2018. The show received 5* reviews both on the tour and at the 2017 Edinburgh Fringe, and the content was released as a studio album. It also resulted in his début poetry collection, which was published by Verve Poetry Press on National Poetry Day 2018. Through his activism, he's shared a stage with names ranging from Paul Weller, The Fall and Sleaford Mods; to Sara Pascoe, Shappi Korshandi and Francesca Martinez; to Jeremy Corbyn, Ken Loach and Kate Tempest. He's an ambassador for Eureka! The National Children's Museum and Trinity Homeless Projects. In late 2016, he was once of the poets to launch Nationwide Building Society's well-known TV ad campaign. Recent commissions include Leeds United FC, Cancer Research UK and Jeremy Corbyn's official campaign team. Matt's début kids' poetry collection 'A Hurricane in my Head' was published by Bloomsbury in July 2019. It was one of National Poetry Day's selected titles, which led to a live appearance on Blue Peter. Matt also runs spoken word record label Nymphs & Thugs, co-hosts Roaring 20s Radio on Soho Radio and writes for The State of the Arts and The Football Pink.