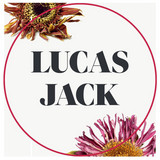 Lucas Jack began his songwriting and performance career crafting songs for any and all family occasions as a small boy, a passion he carried as a teenager to the bars, hotel lobbies, and social events of his hometown of Kalamazoo, Michigan – anywhere with an unguarded piano. This creative impulse was fostered throughout his twenties via collaboration with a series of bands while working as an attorney in Chicago. At last heeding music as a full-time calling, he left the corporate grind and released his first album, The Chicago EP (2012), followed by Before I Forget (2015) and Make it Beautiful (2016). Lucas Jack describes himself as a “recovering attorney,” in reference to the 5 dismal years he spent as a lawyer battling the liars and scallywags in Chicago before heeding his true calling as a songwriter and performer. Fortunately, Lucas has managed to convert those experiences into fodder for his own unique brand of songwriting. Lucas Jack examines the complexities of love, life, frustration and individual triumph. His catchy pop-rock tunes create a sense of nostalgia in listeners, allowing them to access their own emotions and memories through the stories Lucas tells. Lucas has lived in Kalamazoo, Michigan, Chicago, Illinois, and San Antonio, Texas. He now calls St. Louis, Missouri home. He is married with two daughters, Clementine and Josephine (the subjects of several songs).