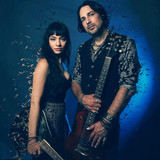 Since launching onto the Blues scene with their debut record ‘The Uprising EP’ in April 2019, Grace and Aaron have been going from strength to strength. The British husband and wife duo have an ever-growing online fan base and have gained the attention of The Blues Show (BBC Radio 2) as well as national blues publications including Blues Matters & Blues In Britain. Their unique vocal-led approach to songwriting, dirty electric guitar and slide resonator mandolin create a minimalistic, contemporary Blues/Rock sound that echos 1970s classic rock with hints of the 1930s blues that inspire them. With an unconventional duo format for live shows, gutsy musicianship and powerful, fused vocal harmonies, they create an intense wall of sound. Before the Lockdown the duo were touring the UK in their self-converted VW camper with an impressive tour schedule, but have since been Rockin' The Lockdown with weekly Facebook live streams, attracting hundreds of thousands of viewers. Their follow up EP ‘Innocence Of Youth’ was released in May 2020 and they are currently recording a full-length studio album due to be released in November 2020.