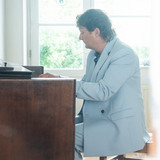 Recognized for their lush, emotive adult pop/rock, Belgian band Novastar are led by singer and songwriter Joost Zweegers. Their 2000 eponymous debut was the first of a string of albums to hit the Top Three in Belgium's Flanders region when it went all the way to number one. Novastar's fourth LP, 2014's Inside Outside, became their third to top the chart.

Though he was born in the Netherlands, Joost Zweegers was raised in Neerpelt, Belgium from the age of three. He moved to Eindhoven at 17, eventually settling in Antwerp. In 1992, his indie rock band the Sideburns made the finals of Belgian talent competition Humo's Rock Rally, however, Zweegers soon parted ways with the group. He entered the Rock Rally contest again in 1996, this time with a trio version of Novastar. After receiving praise from the judges for strong melodies and Zweegers nuanced, wide-ranging vocals, the group finished in first place. Zweegers put his winnings into recording equipment and continued to write songs while the band remained unsigned. He was eventually approached by Warner Music Benelux in 1999. The project's first album, the Wouter Van Belle-produced Novastar, arrived on Warner in 2000 and eventually reached number one on the Flemish chart. It went on to win Best Belgian Album at the TMF Awards. With a lineup that by then featured Zweegers (vocals, guitar), guitarist Lars Van Bambost, bass player Jang Coenen, and drummers Cathy-Ann Van Volsem and Karel de Backer, they began earning invitations to play larger festivals in the region. Zweegers also tried to raise the profile of his music by booking some solo shows in places like Germany and the United States. Featuring songwriting collaborations with Piet Goddaer, Novastar's second album, Another Lonely Soul, followed in 2004. It again took them to the top of the Flemish chart. This time, they also charted in the French-speaking region of Belgium, where they reached number 56. Zweegers suffered a foot injury on-stage in 2005 and took some time off to recover. After reconvening in the studio in 2007 with producer Wim De Wilde and musicians including all-star percussionist Luis Jardim, the resulting Almost Bangor arrived in 2008. Accompanied by a sold-out tour of clubs and arenas, it hit number two in Flanders and number seven in the Netherlands. Zweegers reached out to John Leckie (Radiohead, the Stone Roses) to produce and mix Novastar's fourth full-length, Inside Outside. That album debuted at number one in Flanders upon its release in 2014, peaking at number eight in the Netherlands. Novastar made their Sony Music debut with In the Cold Light of Monday in 2018. Featuring production by Mikey Rowe of Noel Gallagher's High Flying Birds, it became their fifth straight album to hit either number one or number two in Flanders when it reached the number two spot. ~ Marcy Donelson, Rovi