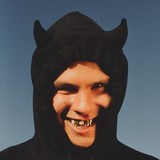 The success of slowthai isn’t hard to grasp, he’s one of the few artists where popularity hasn’t compromised his honesty. Relatable to us all, Ty tells me he has been in “his own wars in his mind”, but he is determined to make it out of the “rubble and rise like a diamond”, as he raps on ‘focus’. His ability to bear his imperfections and contradictions makes his second studio album ‘TYRON' an album that is the antithesis of a culture of purity. A resistance to the rising tide of moral one-upmanship and the pervasive self- righteousness that blinds us to our own fallibility. What sets slowthai apart from his peers is his distinctive aggrieved sound, a hybrid between Grime in its infancy, and a coarseness comparable to the London Calling era of punk. You could say that slowthai is a quintessentially (vexed) British artist. - Ayishat Akanbi, November 2020