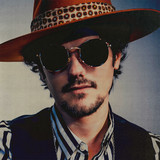 Throughout his life, US based singer/guitarist Bluhauz has experienced a truly unpredictable and unprecedented journey. From admiring Led Zeppelin guitarist Jimmy Page to sharing experiences with him, from being frontman of Stone Giant to launching his solo career, from attending Berklee College of Music to playing some of the most famed festivals in the world such as Lollapalooza - Bluhauz has done all of these things. Now, with his debut solo album out August 6th, 2021, Bluhauz, he’s setting off on his biggest adventure yet - musically, spiritually, and personally.   Lead single “Purify My Soul,” released in 2020, signaled Bluhauz’s intent. “I’m a more spiritual kind of person now, looking for self-awareness. A lot of my songs talk about purifying your soul and that kind of spiritual growth, and that theme repeats all over the album,” he says. This is evident with the other singles that have been released as well as the rest of the thirteen tracks on the album. Bluhauz's music has been already featured by Classic Rock Magazine, Spotify, and Billboard among other major press.   This new level of maturity and insight doesn’t mean Bluhauz’s music is overly serious, however: this is alternative blues rock with a lot of heart, soul, and swagger. Some songs have a more pop sensibility while others are funky - but regardless of the stylistic explorations, every song features his nimble blues-influenced guitar playing and impassioned vocals.